The Three-tier Pagoda of the Dharma

Click on the picture to nominate Turning the Wheel of Wonder for a Blogisattva award.

Recommended Links for Clear-eyed Views of our World

Differences Between Consciousness Only And Mind Only.


Here's a first-go at a table briefly outlining some of the distinctions between the teachings of mind only (cittamatra) and consciousness only (vijnaptimatra).

I have observed that in Tibetan Buddhism the distinctions seem to have been lost or never established when Buddha Dharma came from India to Tibet, and so the Tibetan system usually employs consciousness only and mind only interchangeably without distinction.

Zen Buddhism is in the lineage of the Indian ancestral master Bodhidharma who brought the "One Vehicle lineage of Southern India" to China with his manner of teaching the Lankavatara Sutra.  Therefore, at different times Zen has been called the "Mind Only School" and the "Buddha Mind School" because the mind only tradition of the One Vehicle takes mind as Buddha.

Differences Between Consciousness Only And Mind Only.

Posted by Alan Gregory Wonderwheel at 1:51 PM No comments:

An article in the Guardian reviews a new book Brilliant Green that asks "Are plants sentient?"  I answer with a general yes. Obviously the entire range of flora have different degrees of sentience just as the entire range of fauna have differing degrees of sentience. The wide meaning of sentience means feeling-perception-awareness, e.g., any kind of sense of environment, and the narrow meaning is self-conscious or intelligence measured by self-consciousness.

With the wider meaning, all living beings have some degree of sentience, i.e., awareness. Otherwise they would not be living beings. Traditionally, with the earlier and less sophisticated narrower views of sentience, only people were considered sentient beings having our kind of self-consciousness as our definition of intelligence, and animals and plants were not considered sentient. No recognizable self-consciousness meant no consciousness and therefore no sentience or intelligence.   However, life means interaction, relationship, stimulus and response, so I include all living beings in the category set of sentient beings because responding to the environment, no matter how simplistic or limited, is the sign of "feeling" and the presence of awareness and is thus being active in the response to the environment. Therefore to me, all living beings are sentient.

Next is the question of the degree of sentience. Obviously, there is a spectrum of sentience with mammals at one end and perhaps mold or plankton at the other end. Here, I think the question of self-consciousness is relevant. While all sentient beings are sentient, not all are self-conscious to the same degree.  However we have to watch for species-centric bias because as mammals, we humans can't even access the ranges of sentience on the sensory spectrum that some other mammals can. For example, we can't hear the range of sound that a dog or dolphins can. So there may be many areas of the field of sentience that we are unaware of. An open grass prairie and a redwood forest have different feelings to them for us, and these different feelings arise from them, not just our imagination. The different feelings that we are sensing are our limited perception of the sentient fields of those different plant communities.

In Buddhism, there is the concept of Buddha fields or Buddha lands which are of infinite variety and relate to all the fields of sentience of all the sentient beings. In addition to Buddha lands being other dimensions or other planets or galaxies, they are also other being's fields of consciousness, such as the Elephants' Buddha land where beings can communicate with stomping on the earth or dolphins' Buddha land where beings communicate by whistling, clicking, sounds.

Again, we are high up on the predatory food chain and have "conquered" the planet according to our own species-centric assessment, yet there is much we do not understand about other creatures, both animals and plants, and when we destroy our own ability to live on the planet by pollution, climate change, or nuclear war or power radiation, there are other species of sentient beings who will survive, and then from their perspective they will be the meek who have inherited the earth.
Posted by Alan Gregory Wonderwheel at 9:19 AM 1 comment:

Our Lives Matter Without Being Color-coded

These are not easy words to write. Contrary to many progressives, I did not find the Black Lives Matter disturbance at the Netroots Nation conference to be positive or beneficial. I think progressive groups need to hold their own events and not interrupt each other's events for their own agenda. I don't think the Black Lives Matter people would be as considerate as the Netroots Nation people to being interrupted by Climate Change activists or Save the Whales activists.


Specifically, I am bothered by the demand "Say it, just say it: Black Lives Matter." To me the "Black Lives Matter" name itself is racist. I know that many of my friends and fellow travelers in progressive directions don't understand me when I say this. There is the perception that only "white" is racist because it is inherently "white supremacist," while "Black Lives Matters" can't be racist because they are not arguing for "black supremacy," only for black respect. I totally get this argument as it is the current version of the "Black is Beautiful" and "Black Power" movements of my youth, yet at the same time I totally reject this argument, now as I did then, as a basis for believing in a “black race.” A view doesn't have to be "supremacist" to be exclusive, while any exclusivity in identity between one group and another is the seed of what becomes group supremacy and racism when the categories are racial.


I can identify with the frustration shown in this video. I can appreciate the sense of wanting to control a space as a group identified as people of African ancestry when one's whole life has felt like it has existed in a space controlled by people of European ancestry. But the seeds of racism are clearly present within that small and temporary, but racially defined, space.


To me any argument that affirms the existence of either a "white race" or a “black race” as a separate race is an argument for racism.  The reason is that “black” or "white" is not a club, not a religion, or any other social category that a person can join voluntarily, and it is not a biological category like male and female that one should be assigned to involuntarily (as we have seen how such assignment can cause so many problems for transgendered people).   So to look at people/ourselves and assign them/us into color-coded categories of “race” is the essential activity of racism, whether or not one puts one’s own color on the top of the preferred scale. In my worldview, humans simply cannot identify as color-coded categories without calling our identified color "us" and all other identified colors "them."

When "us" and "them" become fixed into a determinative group identity, then conflict and fighting between the groups is inevitable. "Black" and "white" are just variations on the theme of "us" and "them," but it is more pernicious than many forms of "us" and "them" because the categories are perceived as "natural" and "biological" with a real biological basis for the negative projections about the "them."


As I see it, the terminology of “black and white” was created by white supremacists using a white racist frame. The entire social construct of a “black race” and a “white race” was created by white supremacists. If we use the language, categories, and framing created by white supremacists, then it only reinforces the social frame of reference and cultural fiction that races even exist in the first place. There is no "white race" and no "black race" (just like there are no brown, yellow, and red races) except as a social fiction originally created by people who called themselves "white" for the very purpose of creating a justification for their supremacy as a group: the group they created and labeled “the white race."  To me, the person who identifies themselves as “white” or “black” is a person whose mind has already been colonized and brainwashed by the false and erroneous notions of white supremacy.


The following table of a Johari window is how I have come to see my predicament of trying to articulate my perspective.


This difference between the perspectives of Group 1 and Group 3 does not even begin to address the problems in communication arising from considering the Group 2 and Group 4 people in society who do not accept that there is institutional racism, whether or not they accept or reject the idea of race as a real thing.  However, in addressing the question of institutional racism with a person who does not believe it exists, we should still bear in mind whether their denial is from the standpoint of believing in race (Group 2) or not (Group 4), because it will determine how we should approach each person in discussion. The same logic and arguments will not be received the same by the two different groups. 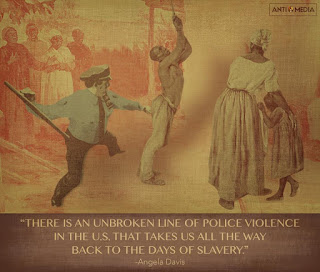